July is off to a hot start – 30+ degrees of hot! Summer camps are in full swing with Ortona Gymnastics, Go Sports volleyball/basketball and U of A Green and GOLD multi-sport camps all taking place this summer. These camps will see upwards of 500 youth participating throughout the summer where kids will hone their skills in specific sports like volleyball and basketball or will be introduced to new sports and activities.

According to camp co-leader Andrée Vincent, the kids will gain confidence and learn that their health condition does not need to define them.

“Some of the kids who are attending have let go or quit activities because of their conditions,” said Vincent, a second-year medical student at the U of A. “We really want them to find out that they can still perform in those disciplines, even though they have health concerns that impact them.”

The Starlight Performance Camp is supported through an Alberta Medical Association / Canadian Medical Association Emerging Leaders in Health Promotion grant along with additional funding from the U of A’s Medical Students’ Association. The camp is also supported by Ortona Gymnastics which is giving free use of its facility.

Happy Canada Day everyone! It’s a big year for our country because it’s not just Canada’s birthday – it’s Canada’s 150th birthday. Celebrations will be held across the country tomorrow night and our government has ensured this year will be a party like no other with an unprecedented budget of 500 million dollars put towards the festivities. We at the Saville Community Sports Centre are celebrating Canada Day the only way we know how – with a giant basketball tournament! Starting today and running through till Sunday, we are hosting the Edmonton Grads Great Canadian Shootout. The Great Canadian Shootout will be one of the biggest tournaments we host this year and basketball just so happens to be a sport that was invented in Canada.

“The roots of basketball are firmly embedded in Canada. In 1891 the game was invented by

Dr. James Naismith, a Canadian who hailed from Almonte, Ontario.

Having been given the task of creating a new indoor sports activity while conducting a physical education class at the international YMCA training school in Springfield, Massachusetts, Naismith designed what we now call basketball. The original game involved 13 rules and a peach basket hung ten feet above the floor. Even though it took place in the United States, at least ten of the players who participated in the first-ever game were university students from Quebec.” – NBA.com

The organization hosting the Great Canadian Shootout this weekend (Edmonton Grads Basketball Centre) is still one of the most celebrated amateur teams in basketball history.

“One of the most storied amateur teams in Canadian basketball history is the Edmonton Commercial Graduates (Grad’s), a group of Canadian women who dominated the sport in the 1920s, 30s and 40s. Over 25 years, the Grad’s played 522 games at home and abroad, against both women’s and men’s teams. The Grad’s accomplished a record-breaking winning streak of 147 games and throughout their basketball tenure won a remarkable 502 times.” – NBA.com

Feel free to stop by the Saville Community Sports Centre this weekend and celebrate our beautiful country by watching a truly Canadian sport and some of the best amateur talent in Canada!

It’s been a long process but the North Hall gyms have finally cured and are ready for use!

We resurface the gym floors every two years with the North Hall getting done on odd years and the South Hall/Competition Gym getting done on even years. With the gyms reopening yesterday, we needed someone to break them in and who better than a bunch of kids playing basketball! Today, Basketball Alberta’s youth clinic had the honour of being the first major

event on the new floor. Not only did these kids get a chance to hone their basketball skills, but they were coached by members from the Canadian Women’s National Team. We are the home court for the Canadian Women’s Team and it was great to see them showing these youngsters the ins and outs of the game. The National Team has been here all week in preparation for the upcoming season.

Summer is generally the slow season here at the GO Centre but that doesn’t mean there’s nothing going on. We have two major tournaments scheduled this weekend and next week to close out June.

Look for more on the Great Canadian Shootout in next week’s GO Sports Newswire.

When you think of June training camps, the first thing that comes to mind is probably the Eskimos and the start of the CFL Season, but they aren’t the only ones gearing up for this season. Come on down to the Saville Community Sports Centre this weekend where you’ll see one of the most fast paced and exciting variations of a traditional sport. What began Thursday and wraps up Sunday, is the Canadian Women’s National Sitting 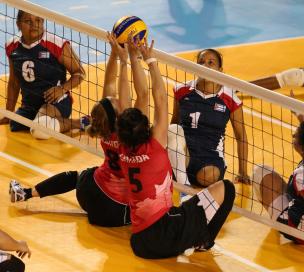 Volleyball training camp. “Our women’s national team will be holding their June training camp at Saville this weekend.  This is the same team that went to the Paralympics back in September,” explains Ian Halliday, Director of High Performance for Sitting Volleyball. The Saville Community Sports Centre is the home of Canada’s National Women’s Sitting Volleyball Team and this weekend will be an amazing opportunity to get an intimate look at the sport and some of its best athletes!

We all know the sport of Volleyball but the sitting variation puts a unique and much faster twist on the sport. “In sitting volleyball, the athletes must remain seated directly on the ground (no wheelchairs, sleds or carts) and compete on a smaller court and a lower net. Athletes are allowed to block the serve in sitting volleyball and their buttocks must remain in contact with the ground whenever they play the ball. Other than that, the game is very similar to traditional volleyball in its tactics and strategies but is a much faster version of the game because of the lower net and smaller court,” says Ian.

The team’s next major competition will see them defending home soil at the 2017 Pan Am Championship in Montreal this October. “This is a World Championship qualification tournament for us and we hope to finish in the top 2 and earn a spot in the 2018 World Championships in the Netherlands,” says Ian.

Training camp is open to the public with upcoming sessions as follows:

Interested in trying the sport or learning more about it? Give Ian a shout at ihalliday@volleyball.ca. “We are always looking to find ways to grow the game and get more people playing!” Says Ian.